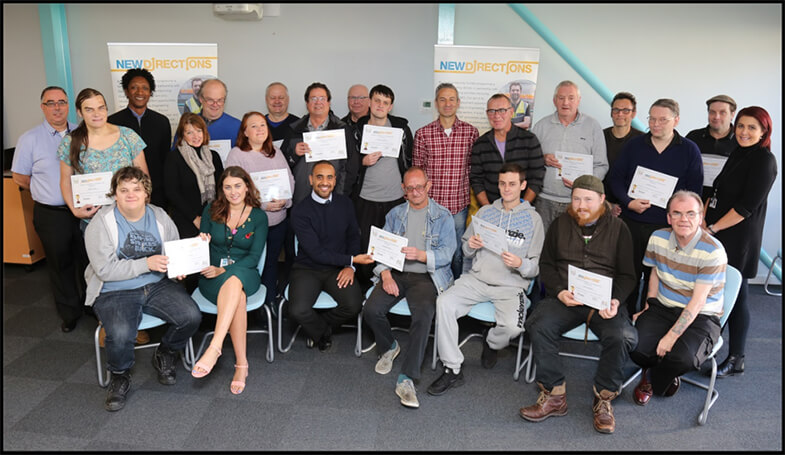 Charitable housing association BCHA is celebrating its second cohort of 23 graduates following the successful completion of the 12-week New Directions programme designed to identify routes into employment or further education.

A graduation ceremony, also attended by employers and trainers, was held at The Factory, BCHA’s premises in Alder Hills, Poole, where the course was predominantly delivered.

Already, 11 of the graduates have found work, with that number set to rise further in the near future, and another one has successfully signed up for an Engineering apprenticeship with Bournemouth and Poole College.

New Directions is a fully-funded programme and is being delivered by BCHA, in partnership with Dorset Engineering and Manufacturing Cluster (Dorset EMC) and supported by the JPMorgan Chase Foundation.

The three stages of the programme look at personal development through a variety of workshops by BCHA’s Ignite team. This is followed by practical skills workshops with a New Directions skills trainer, and input from local employers, and then towards employment or progression routes to further education, followed by in-work support for the first three months.

The aim of the programme is to introduce new employment opportunities, specifically focusing on growth employment sectors, particularly engineering, manufacturing and production.

Participants on the 12-week course were initially referred from a number of sources such as Jobcentres, local employability providers, charities and the NHS.

The course offered a practical skills training project with input from local employers, including staff volunteers from J.P. Morgan who helped by providing interview techniques and confidence building, followed by 30 minute mock interviews at J.P. Morgan offices in Bournemouth.

BCHA Wellbeing Coach Eloise Coster, who helped run the programme, said: “We saw an amazing change in our latest cohort – from the day they stepped through the door to the day they graduated.’’

“A number of them were at first somewhat sceptical about what they night achieve, but that scepticism soon disappeared and they were throwing themselves into the course.’’

“We saw increased confidence in the participants and the feedback we received was that it was a particularly worthwhile and rewarding experience – as well as giving them important practical skills.’’

“And there is no greater testament to the worth of the course that some of the graduates were unable to make the graduation ceremony because they were already in paid employment.”

The course, which also looks at individual wellbeing, involved participants attending The Factory three or four days a week and getting into a work-like routine and experiencing working with people.

Participants receive an individual needs assessment and have the support of a dedicated team throughout the programme to support them with barriers that may arise re-entering into employment.

Graduates from this New Directions cohort have spoken of their experiences.

Robert Davies said: “I had lost my way, had no clear direction to finding a fulfilling job. New Directions has helped me find myself again and I now feel more confident that I will find and fit in to my new job role.”

Graham Lawton added: “It has opened up my eyes to the different job opportunities and greater diversity of availability.”

Russell Hann added: “From the start everybody involved in New Directions made me feel welcome and put me at ease which is obviously important in the overall impression you take from your experience.”

And Neil Phillips said: “The whole New Directions staffing team has made me feel valued.”

A new intake has already started on the latest course.

For more information about New Directions or to make a referral, call 01202 410500 or email newdirections@bcha.org.uk