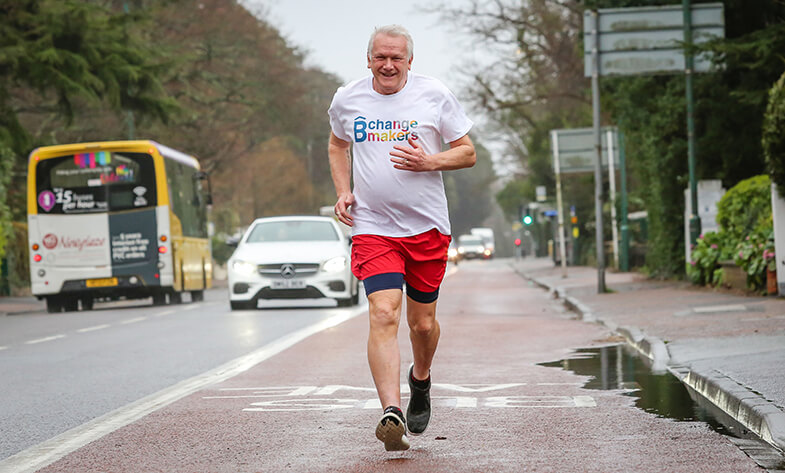 The only thing 64-year-old fitness enthusiast Paul Whitehouse does by halves is marathons.

The tenancy officer is planning to run 200km of events in just one year to raise money for Bournemouth Churches Housing Association (BCHA) – starting with the Weymouth Half Marathon this weekend (March 17).

Father-of-five Paul from Christchurch, said: “I’ve always enjoyed keeping fit. I’ve played football, badminton and tennis at a high level but I actually only began running seriously last year when I ran the New Forest half and then the Bournemouth full marathon.

“If I’m truthful I don’t actually enjoy running that much. It’s tough! But I do love the huge sense of achievement I get after completing an event. So I decided to set myself a real challenge – a whole year of running events, with the hope of raising some money for BCHA along the way.”

He intends to run the remaining 28km through Park Runs and other local races but says he will probably run at least 400km once he factors in his training.

Paul began working for BCHA in January and has worked in housing for more than 30 years.

BCHA is a not for profit, registered Housing Association which began 50 years ago and helps 10,000 people each year get off the streets, out of abuse, over skill barriers and onto independent living.

Paul said: “I hope to raise at least £2000 for BCHA’s 50th anniversary Bchangemakers campaign and the money I raise will go towards the continuing redevelopment of one of its homeless hostels, 10 St Pauls in Bournemouth. It’s a fabulous facility which provides supported accommodation for people affected by homelessness, substance and alcohol misuse and complex trauma issues.”

He added: “I’m not starting my 200km Challenge in an ideal position, in that I was ill for much of January and missed a lot of training - and the Weymouth Half is straight away. But I’m feeling fit and I’m hoping people will start sponsoring me via my JustGiving page, which will really spur me on.”

Paul can be sponsored at: https://www.justgiving.com/fundraising/pauls200kmchallenge