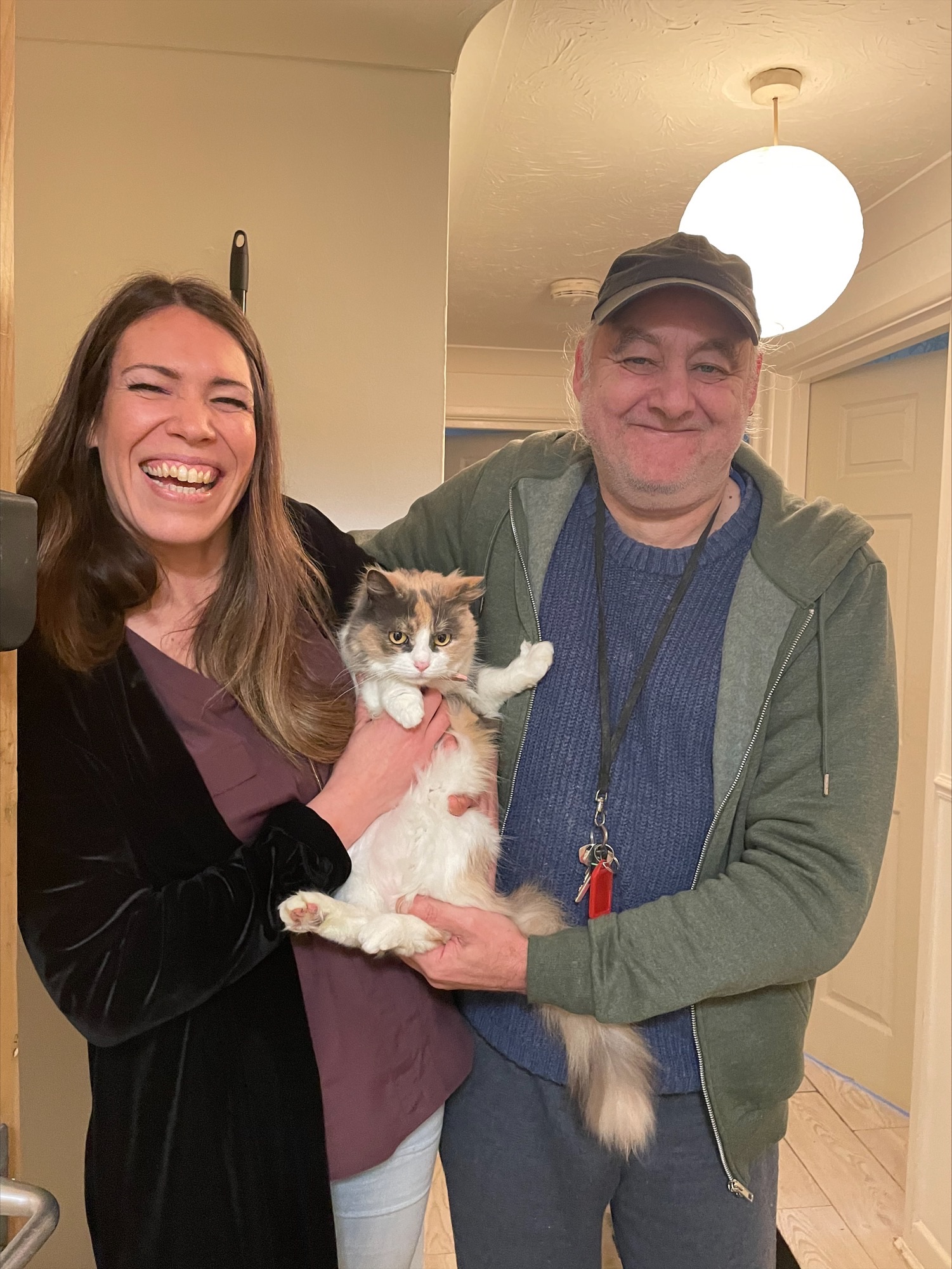 A Dorset man has told how the help of two local organisations – and his love for his cat - helped him escape addiction and homelessness.

In a story echoing the well-known book and film A Street Cat Called Bob, Kevin Trim and his cat Tinkerbell were homeless and slept rough in a tent for two years.

Now, thanks to the charitable housing association BCHA and homelessness charity St Mungo’s, commissioned by BCP Council, Kevin and Tinkerbell are celebrating their first anniversary in their own home.

Kevin, 57, explained: “In 2016, I lost my rented flat due to a personal break-up. At the time I was drinking heavily and found himself with nowhere to go, no job and not many prospects for the future. All I had was my kitten Tinkerbell.

“I stayed with a friend for a couple of weeks and then I felt I had no choice but to go on the streets. So, I went and bought a £15 tent for myself and Tinkerbell. I didn’t know it then, but we would end up living in a tent for the next two years.”

Kevin said that in the summer the tent was like an “oven” and in winter it was wet with condensation.

“My clothes were always damp. I could only have ‘tramp showers’ - washing with wet wipes - and I lived in constant fear of losing our belongings and our safe place to sleep.

“I took Tinkerbell everywhere with me in her carry case and was always scared that she would run off. But apart from one occasion, she never left me.

“Once, I came back to find my tent and all my belongings had been taken and it really felt like the world had ended. I went to a soup kitchen and with their help I got a new tent. I also found a new place to camp, but eventually we were moved on again.

“They were desperate times. But I was determined to stop drinking though and gradually went from two bottles of whiskey a day, to four cans, then eventually two cans. When I weaned myself down to one can, I knew I could finally stop and I’m proud to say I have been sober now for five years.”

Kevin and Tinkerbell moved their tent close to the train tracks in Westbourne in a bid to stay hidden.

Kevin said: “One day I heard a bloke shout over the fence: “Is there someone in a tent down there?”

“I didn’t know whether to answer. But I did and it was a guy called Neil from the homelessness charity St Mungo’s Outreach Team.

“Neil told me if I carried on sleeping rough, because of my age I probably wouldn’t survive another winter,” and he took me to BCHA’s 10 St Pauls hostel in Bournemouth.

“The first thing I was worried about was if Tinkerbell could stay there too, but they said that was no problem.

“I filled in a form and by 2pm that same day I was in a warm room.”

Kevin also met BCHA support worker Hannah Brightman, one of the people he credits with ‘saving his life’.

Hannah said: “Kevin was at 10 St Pauls for just over two years, where he also had access to support and health care and we all fell in love with Tinkerbell and how devoted they were to each other.

“From there they went into our Henley House supported housing and a few months later, our Tenancy Sustainment Team could see they were ready to branch out on their own and we helped them move into a one bedroom ge

“We all feel very proud of how Kevin has overcome his addiction and has created a warm and cosy home for him and Tinkerbell,” continued Hannah.

“And I for one feel so privileged to have been able to support them along the way.”

Kevin said: “Tinkerbell has been central to my recovery and survival - something to look at, look after and love and if I hadn’t had her and Neil hadn’t had found me and the staff at BCHA hadn’t helped me, I know I would be dead and that is no exaggeration.

“I’m so grateful and when people say to me: “Look around - you have a home, you’ve done it,” it makes me feel brilliant.”

Or Debbie Granville on behalf of BCHA Communications on: 07884 657782 email: Debbie.granville@deepsouthmedia.co.uk

St Mungo’s is a leading homelessness charity with national influence. It works in partnership with local authorities, health colleagues and communities, to end homelessness and rebuild lives. It operates in London and across the South East and the South West of England. Its outreach teams are out 365 days a year supporting people experiencing street homelessness. Last year the charity supported more than 31,600 people who were homeless, or at risk of homelessness, through 207 services. St Mungo’s services support over 3,200 people every night. St Mungo’s believes rough sleeping can be ended in this country, and that policies and interventions can be put in place to end homelessness for good.